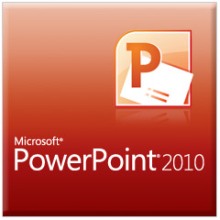 So said Maria in The Sound of Music – and fewer words of wisdom have ever graced an actress’ lips. So it is with technology and presentations…

Off the top of my head, I can’t think of a single item of technology which exists purely because it exists, if you see what I mean.

Why? Because technology has to be actively invented – it doesn’t spring into existence spontaneously.

That said, of course, it doesn’t have to be used, just because we’ve invented it. We have the technology to blow the planet out of orbit and kill everything on it, but that’s not a good idea.  As a friend of mine once said in a university seminar about some statistical software that make it easier for non-statisticians to do analysis

I can give you a scalpel and call it a do-it-yourself-brain-surgery-kit – but that doesn’t make it a good idea!

In my own specialist world of presentations and presentations training the market dominator for slides and so on is without a doubt PowerPoint, by Microsoft. (Side note, no serious presenter thinks it’s the best software, just the one that everyone knows.) But just like the atom bomb, just because someone’s invented it, you don’t have to use it!

I’m not saying you shouldn’t use it – of course not – I’m saying you don’t have to use it, that’s all.

Ask yourself now, as you sit there, presumably without the terror of a forthcoming presentation over-riding your better judgement, do either of them sound like a defining  reason to use PowerPoint?

The first point makes the would-be presenter no better than a lemming, simply following the lemming in front and throwing themselves off a cliff. The second point is kind of excusable, but the not exactly likely to cover the speaker in glory!

Please, for the sake of your audience, I urge you… before you fire up the technology and turn to PowerPoint, ask yourself this simple question:

Is PowerPoint the best way to make the presentation?

If you can put your hand on your heart and say yes, then go right ahead. If your answer is no, then do the other thing, the thing you think is better. If the answer is that you don’t know, don’t make the default PowerPoint assumption. Find out!

I’m an expert in slide software – but I don’t always use it. If it’s going to help, then great; if I’m using it because of one of the dumb reasons I’ve listed above, then I’m doing my audience a dis-service. Trust me, if I show a blank screen, it’s not because I can’t create a slide, it’s because I’ve decided a blank screen serves my audience better.

(Oh, another side note… having something that functions as your script doesn’t count as serving your audience!)

Shelley’s posts do great jobs of showing you how to do trick X or trick Y in PowerPoint. And I’m not saying you shouldn’t read them and act on ‘em… of course you should – they’re brilliant –  but before you have the animated slide with 32 actions and 15 superimpositions and 11 sound effects, ask yourself why they’re there!

Does it support your audience?