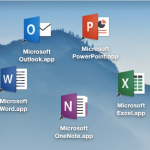 Office
2016 for Mac was released in August. It is a long awaited and welcome upgrade of Microsoft Office for Mac users. Microsoft has always offered a Mac friendly version of its Office software which is the most used software across business.

Office for Mac has always been able to communicate with Office for Windows, however it has not looked the same. This can be challenging if you work on a Windows PC in the office and a Mac at home or perhaps your organisation is happy for staff to pick the type of computer they wish to use. Up until this latest release, the different versions looked and behaved a little differently.

These are just some of the great things about Office 2016 for Mac. I have been using it for a while now and am loving it.

I am also in the process of writing a series of books on Office 2016 for Mac. The Microsoft Word 2016 book is currently in progress.

Let me know what you think of Office 2016 for Mac.